skip to main | skip to sidebar

Shall I Compare Thee to a Summer's Day?

More later, possibly, when I have marginally recovered from June (and let me tell you, nothing is so rare).
Posted by eshetchayil at 9:27 PM No comments:

June is Busting Out All Over

Yes, I know it's been (cough) a while since I posted. Blame my boyfriend, he's way more fascinating than anyone has a right to be. Also, he lives in Oklahoma, so we have to make...uh...hay...while the sun shines. Anyone with a lead on a philosophy assistant visiting professor position in or around New York, you know where to find me.

But, hallelujah, today is the first of June. JUNE JUNE JUNE! Today is the day I traditionally begin reading Charlotte's Web. And I did. Mercifully MOST of my Criminals remembered my injunction: DO NOT USE THE WORD MOVIE IN CONNECTION WITH ANYTHING WE READ. EVER. I detest hearing "Miss Victoria! I saw the movie of that!" Most of them don't understand me when I yell "NEVER JUDGE A BOOK BY ITS MOVIE," but some do. Of course, the ones who do wouldn't do that in the first place. The eternal paradox.

As I write, there are 20 (19 1/2!) days left of this school year. The natives are restless. I'm keeping them in line with the old no-California-Pizza-Kitchen maneuver. Talk and die...or at least miss the field trip, which to a 7 year old is LIKE dying.

This time of year, teachers everywhere are looking ahead....in their minds' eyes they're planting basil and tomatoes, reading trashy novels, sleeping late, baking things, cooking things, staring at the ceiling, going to the county fair. It's the only thing that keeps them from jumping out a window, because in reality they're keeping 30 seven year olds itching to be free from killing each other, jumping in the garbage can, having a food fight, running with scissors...you get the point.

And what is so rare as a day in June!
Posted by eshetchayil at 12:35 PM No comments:

The Criminals and I will henceforth be found at: http://thedownstaircase.blogspot.com

We decided we liked that name better.
Posted by eshetchayil at 8:18 PM No comments:

that someone who has actually BEEN in a classroom would write an article about "what we need to make teachers be better." I'm talking to YOU, New York Times.

Because frankly, what we need is:

for parents to realize that they actually do bear the responsibility for teaching their children to behave themselves and for figuring out the right consequences when they don't.

for same to realize that WE the TEACHERS are NOT reponsible for teaching their children to:

use the toilet (as opposed to peeing in their pants EVERY DAY)
use toilet paper (as opposed to spreading their waste all over themselves and the bathroom)
wash their hands
blow their noses
throw away their dirty tissues in the garbage can, not on the floor
dress themselves, including tying their shoes and pulling up their pants and zipping things - pants, coats, jackets
properly greet and say good bye to any other person
say please and thank you and you're welcome
carry on a conversation
know vocabulary they should have had at the age of two (like "share" and "red")
chew with their mouths closed
be aware that there is such a thing called an alphabet and there are such things called numbers (sorry folks, by Kindergarten no one should say "What's that?" to the teacher)

If your child has a fever or is throwing up, do not send him to school. We are not overpaid babysitters. When your child is sick, YOU must make arrangements for him to be cared for AT HOME. Also, when the school nurse calls you to tell you that you must come and pick up your vomiting, miserably sick child, YOU DO NOT GET TO HANG UP ON HER.

If the teacher tells you that the child has broken a rule or done something wrong, do not stand on the playground and scream at the teacher in front of the child and all the other children. THIS MIGHT BE THE REASON THE CHILDREN THINK IT'S OKAY TO BREAK INTO SMALL GROUPS FOR MULTIPLICATION PRACTICE AND THEN DO WHATEVER THEY DAMN WELL PLEASE.

When your child comes home from school with his bookbag in tow, OPEN IT. There IS homework inside and also all those notices (surprise!) you scream you were never given.

The teacher does NOT say "Read with your child every night," because she likes to hear herself talk. MANDATORY PARENT BEHAVIOR.

just to name a smattering.

And now for the politicians:

I will refrain from telling the President of the United States to shut up, especially since I voted for him.

Most of you have never been in a classroom for more than a photo op. You have absolutely no freaking clue what we do every day. You wouldn't have the slightest idea how to teach a person to read. You think that only idiots are teachers because how hard can it be - you stand up in front of them and tell them things. Hint: This does not work.

You have no idea why tenure exists or what protections it offers society from things like its children being taught that God made the earth 4,000 years ago, and that's when the dinosaurs showed up with Adam and Eve. IN SCIENCE CLASS.

A teacher who has the 8th grade beginning ESL class of 14 year olds who just got here from a third world country and don't know their OWN alphabet let alone the English one is NOT going to garner the same test scores as the teacher who has the gifted and talented class. Standardized testing doesn't prove sh...inola about a teacher's ability, no matter how much you want it to. Last year I had the former class (in first grade). In September, not a single one read on grade level. In June, about half my class could read on grade level. This year I have a bunch of smarties, and 3/4 of my class reads 3rd grade level or above - in the second grade. It is neither my mediocrity nor my brilliance that makes this possible. It is human flipping nature.

And to the general conservative public:

Stop telling me how easy my job is. Stop telling me how great it must be to have summers off and work six hours a day. Stop saying "must be nice," and then snorting. I notice that YOU did not choose to spend your days with 25 seven year olds. I'm guessing there's a secret reason why.

I don't EVER work a six hour day, try nine at least plus weekends. It IS great to have summer vacation, because both teachers and kids damn well need it by that point. The children are DONE, and so are we.

And just who told my student's parents they could move to a different neighborhood in the middle of the school year??

Look folks, get it straight. When you give me your kid in September, he is MINE until June. Then I give him his report card with his little handwritten note telling him why I'm proud of him and pointing out what kind of progress he made this year. THEN you get to have him back. You are not allowed to leave in February.

Okay, they are, but it drives me NUTS. What if Mohammed's new teacher doesn't see he's brilliant? What if she's still reading stupid picture books when WE are reading novels (remember Bunnicula, anyone)? What if she doesn't have any interest in building up Judeo-Muslim relations by asking questions about HIS religion and saying what's the same from HER religion?? Gah.

The snow day (yay!) today meant no real "last day" for Mohammed (boo!). His mother picked him up in the midst of the storm yesterday and asked me to come and have tea with her family after they settled in the new house. I'll go to tea, but I'll spend most of it quizzing him on his new classroom. And listen here, if I deem it unacceptable, I'm telling them they have to move back.
Posted by eshetchayil at 9:33 PM No comments:

I forgot I wrote this - happened last month lol.


I can safely say that starfish are not supposed to live in the back of a student desk.

I can safely say this because someone sneaked a live starfish into school yesterday. This morning, it was a dead starfish. A very very stinky dead starfish.

Looks like the second grade could use a few more science lessons.
Posted by eshetchayil at 11:17 PM No comments:

This week I had an evening doctor's appointment, and as it was a late day at school I had to drive straight there (much further East on my Island) from school. This meant no time to stop and make dinner.

Now, slowly but surely I'm returning to my Oberlin Granola Crunchy roots. I stopped buying produce that isn't organic..then I read Animal, Vegetable, Miracle and Fast Food Nation and stopped buying meat except from the small organic case at the local supermarket (because uh, EW). Then I did some reading about bovine growth hormones and whoops! Milk and cheese and butter too. And then, one day last summer I was driving through the idyllic farm country of the area surrounding our little cottage on the lake and saw a small plane swooping over a field of wheat....spraying....some...was that water? Oh wait. That's...in my BREAD. And my convenient pizza dough bought at the supermarket...guess I'm getting that bread machine out and buying organic flour...and covered with organic mozzarella and...wait why am I buying organic mozzarella and making homemade pizza dough if I'm just going to pair it with Ragu? Oh look, they have organic tomato sauce too.

Well you get my point. Locavore, organivore, whatever. But everyone has emergency days when he didn't think ahead and bring a sandwich. So, yeah, I drove through McDonalds in a hurry. And I thought, "Okay, get the Happy Meal, that's for kids, it won't be nearly as bad as a grown up value meal."

So I eat this tiny hockey puck ammonia filled cheeseburger and the miniature bag of pressed dehydrated potato french fries and drink my Diet Chemicals and go to my appointment and pick up the kid at my Mom's and return home, exhausted and...hungry. Big surprise, that (WARNING...WARNING...WARNING... TEACHER ABOUT TO USE A SWEAR WORD) crap didn't fill me up at all. Well hey, I only had a Happy Meal! Go look it up on Weight Watchers, you've probably got enough points out of the 29 you get every day to have a nice piece of whole grain toast and a little organic peanut butter and a glass of skim milk!

Go ahead, ask me how many.

Fourteen. FOURTEEN POINTS. Half the daily calorie intake of a 38 year old woman, and not a particularly skinny one either.

And they're marketing this meal. TO MY CRIMINALS. Give me five minutes in the same room with them.

But technically, it's none of my business. How do I write letters home to parents saying PLEASE DON'T FEED YOUR CHILDREN THIS TRASH THREE OR FOUR TIMES A WEEK AND DON'T BELIEVE THE UTTER BOLLOCKS THAT REPLACING THE FRIES WITH APPLES MAKES IT HEALTHY? It's fast, it's cheap, it's tasty, it's convenient. And it's creating second graders almost as tall as I am, weighing what a fifth grader should weigh.

Maybe some of the parents read my blog? I can always hope.
Posted by eshetchayil at 11:36 AM No comments: 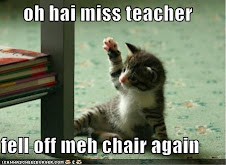 eshetchayil
Intrepid elementary music teacher, just trying to get everyone to sing in tune and read the directions.